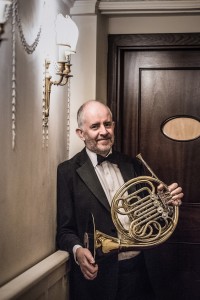 Welcome to the website for Professor Richard Bissill, composer, arranger, horn player and teacher. Though widely known as a horn player, Richard has pursued an almost parallel career as an arranger and composer, creating works for the concert hall and the media.

He has had works commissioned by the London Philharmonic Orchestra, BBC, London Brass, British Horn Society and London Symphony Orchestra. He has also written for television and film including Channel 5 and the BBC.

Richard joined the LSO aged 22, was Principal Horn of the London Philharmonic Orchestra for 25 years and is now in the Orchestra of the Royal Opera House, Covent Garden where from 2009-2017 he served as Section Principal Horn. He has taught at London’s Guildhall School of Music and Drama since 1983.

Browse through the website to read Richard’s biography and to view all Richard’s works from the Works navigation on the right of every page, including his orchestral works, works for brass ensembles, works for horn, the London Horn Sound, Give It One and works for other instruments.

You will be able to listen to and follow extracts from various pieces and have the opportunity to buy or hire music.