Click on a tab below to read Professor Richard Bissill’s biography as Horn Player, Composer and Arranger 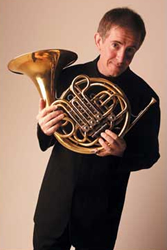 Richard was a member of the Leicestershire Schools Symphony Orchestra, the BBC Radio Leicester Big Band and the National Youth Jazz Orchestra. He studied horn and piano at the Royal Academy of Music before joining the London Symphony Orchestra aged 22. He was Principal Horn of the London Philharmonic Orchestra from 1984-2009 and Section Principal Horn of the Orchestra of the Royal Opera House, Covent Garden from 2009-2017. He has taught at London’s Guildhall School of Music and Drama since 1983 and been a member of London Brass since 1990. He was made a Fellow of the Royal Academy of Music in 2005 and a Fellow of the Guildhall School in 2018 when he also received the Conferment of Title of Professor.

As a freelance session player he has worked with the likes of Paul McCartney, Elton John, Robbie Williams, Joni Mitchell, Peter Gabriel and Quincy Jones, and can be heard playing on numerous film soundtracks including Return of the Jedi, Chicken Run, Gladiator, The Mummy, Shrek, Harry Potter, Lord of the Rings and James Bond.

He has performed Britten’s Serenade and Mozart’s 4th Horn Concerto with the London Philharmonic Orchestra at the Royal Festival Hall, and the concertos of Haydn, Telemann, Mozart and Strauss at the Queen Elizabeth Hall and the Barbican.

The London Philharmonic Orchestra commissioned Grand Opening (1990) a concert waltz, and Rhapsody for Piano and Orchestra (2003) which was premiered in the Royal Festival Hall with the dedicatee soloist Philip Fowke.

Richard Bissill’s Rhapsody For Piano And Orchestra was a delight. But this was not pastiche – but a fond remembrance – a splendid evocation of a style and of an era of British (film) music to be treasured. Technically a brilliantly accomplished piece of work.
David Wishart (recording producer)

Fanfare for a 75th Anniversary

The entire evening’s celebrations had been introduced by a buoyant brass fanfare written for the occasion by the LPO’s principal horn, Richard Bissill. A golden arc of brass was arrayed on stage, in two octet groups. And, as though in stereo, they played with their patternings of alarums and swooping melodies, all based on a jazz-waltz rhythm arising from the sound of the words “seventy-five”.
Hilary Finch (The Times)

Commissioned by the LSO to open its centenary season and premiered at the Barbican under Sir Colin Davis.

For 16 woodwind, commissioned by the Ulster Youth Orchestra.

For 6 harps and horn commissioned by the Royal Academy of Music.

Commissioned by the Royal Academy of Music.

Commissioned by the British Horn Society
and recorded by Guildhall Horn Soloists.

For solo horn commissioned by Philip Jones for the Charles Leggett Award.

For harp, flute and viola, commissioned by the Royal Academy of Music.

For horn & piano written for Nigel Black and Vladimir Ashkenazy.

He first came to prominence as an arranger in 1986 when he won the first-ever Peter Knight Award, sponsored by the Musicians’ Union and Yorkshire TV. His winning work was Christmas Carnival, commissioned by the London Philharmonic Orchestra. This has become a firm festive favourite and has received countless performances around the world. It has been recorded by the Royal Philharmonic Orchestra, the Hallé Orchestra and the Royal Scottish National Orchestra.

The award led to a string of commissions from the BBC Concert Orchestra including East Angliana, recorded and premiered at the Norfolk & Norwich Festival. These arrangements established Richard as an arranger of great understanding and imagination. 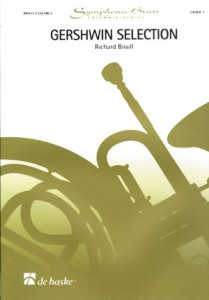 His membership of London Brass has resulted in a set of dazzling arrangements written especially for the ten-man group including Muss i’ denn, A Foggy Foggy May, The Way You Look Tonight, Smoke Gets In Your Eyes, Hungarian Rhapsody No. 2, Granada, Caravan, Spain, Norwegian Wood, De Hamborger Viermeister and Jealousy (All published by BrassWind Publications).

Most have been recorded for either Teldec or the group’s own label LB Records. The music can be acquired from BrassWind Publications.

His arrangement of Caravan was one of 5 he produced for the now classic London Horn Sound CD, voted best French Horn CD ever by the International Horn Society. This was followed by the groundbreaking horn big band CD Give It One on which he played and contributed 5 arrangements and compositions.

He conducted the London Promenade Orchestra for the Readers’ Digest recordings of his arrangements of Anything Goes, Guys & Dolls, So In Love, If He Walked Into My Life, and I’m Still Here.

He has also produced a series of arrangements for Carl Davis, and for artists as diverse as Gilbert Becaud, Youssou Ndour and Nick Lowe.